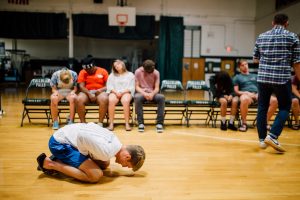 Being a professional Hypnotist is certainly a fun job. Being a magician is fun as well, however as a magician, the majority of the show is planned by me. Everything that happens, happens because I expect it to (with the exception of the occasional off-the-cuff joke). Hypnosis is a bit different.

As a Hypnotist, I more-so prepare an outline of a show which is carried out by the volunteers once they have entered the hypnotic state. In the magic show, I am the star, but in the hypnosis presentation, the volunteers are the stars, and there for the center of comedic attention. Volunteers who have been hypnotized act out skits and scenarios based on how they interpret the situation in their own minds. I have control over the suggestions given, however I do not have control over how they interpret them. We all see things differently based on our life experiences and knowledge.

That being said, before answering the question at hand, let me explain my first and humorous experience learning and performing hypnosis many years ago;

I never had any interest in hypnosis initially. An agent of mine asked me once if I could perform hypnosis. He said that my quick wit and speaking experience would allow me to be a great hypnotist in his opinion. I remember telling him I have no interest in it and honestly find it to be a bunch of bogus. I had never believed in it, and simply thought it was fake…but per his advice I thought about it a bit longer and finally decided to give it a try with an open mind and expand my horizons.

I took my training, wrote a show script, and then ended up with my first hypnosis show booking. It was in Nebraska and the audience was about 600 high school students. I remember sitting back stage trembling. I was a nervous wreck because I had never actually tried it before and I still had my doubts as to whether the process would really truly work or not. The MC introduced me, I took a deep breath, grabbed the mic off my green room table, and boldly walked on stage like I’ve been performing hypnosis for years.

During the show, I allowed 20 random volunteers onto the stage. I had them sit comfortably on folding chairs and take a few breaths as I began the induction (process of inducing the trance). I remember thinking to myself “Oh man, I hope this works…I REALLY hope this works”. Low and behold, I concluded the induction, snapped my fingers, said the word “SLEEP!” and 18 of the 20 students I brought to the stage limply dropped their heads to their chests. They were in the trance and it had worked. I stood there amazed, with my jaw hanging wide open thinking to myself “HOLY CRAP!!! IT ACTUALLY WORKED!!!”. The night continued and a great show was performed for and by that group.

From that moment forward, I was a believer. People ask “is it real?!” all the time, but for some reason, some still refuse to believe even after I say “yes”. Hypnosis is in fact a real and very safe thing. It is actually a naturally occurring phenomena that we all experience every day of our lives-we just don’t typically realize or recognize it.

What does it feel like? The best thing I can compare it to is that feeling when you wake up in the morning and you feel half asleep and half awake in an almost dreamlike state. It feels so wonderful to just lay there under the covers, relax, and not move a muscle. When a person is hypnotized in fact, they are actually wide awake and fully aware of everything that is going on around them…they are just so relaxed and comfortable that they don’t care! They are feeling extreme relaxation and having an incredible time!

People always also tend to ask if you could have somebody murder someone, or rob a bank while hypnotized. Don’t worry, when it comes to suggestions, nobody would do anything that expands beyond their own realm of ethics and morals. Hypnosis simply doesn’t work that way!

Hypnosis is perfectly safe, mentally intriguing, and just downright FUN! If you’re looking for something different to entertain your group with at your next corporate function, theater, or school event, consider bringing in a hypnotist for a show that you and your guests will never forget! I would love to help bring fun to your next event’s atmosphere! Please see the “Hypnosis” section of my website here for more details!